Unnatural Creatures:
A Novel of the Frankenstein Women 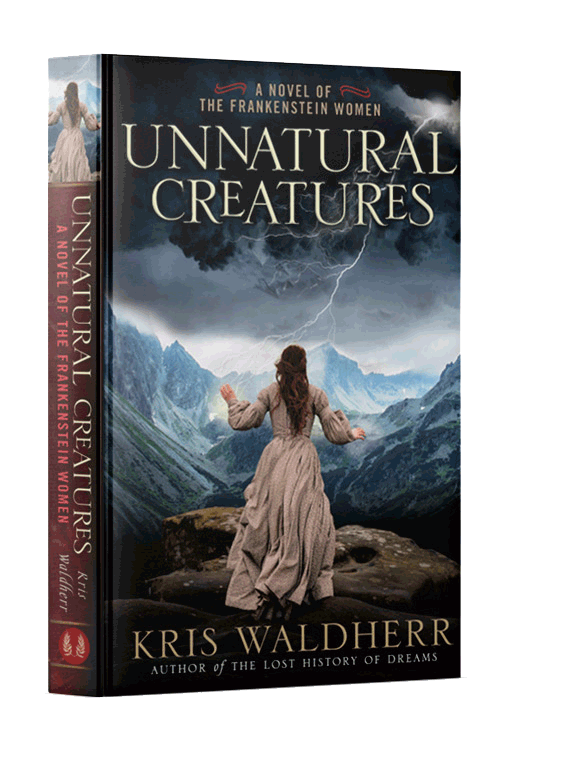 Coming October 4, 2022. Now available for pre-order. For the first time, the untold story of the three women closest to Victor Frankenstein is brought to life in a dark and sweeping reimagining of Frankenstein by the author of The Lost History of Dreams. Read prologue and first two chapters.

Caroline Frankenstein will do anything to protect her family against the nightmarish revolutions engulfing 18th-century Europe. In doing so, she creates her own monster in the form of her scientist son, Victor, whose obsession with conquering death leads to forbidden realms.

Rescued by Caroline as a four-year-old beggar, angelic Elizabeth Lavenza understands the only way she can repay the Frankensteins is by accepting Victor’s hand in marriage. But when Elizabeth’s heart yearns for someone else, the lives of those she most loves collide with the unnatural creature born of Victor’s profane experiments.

After an abusive childhood, otherworldly Justine Moreau is taken in by Caroline to serve the Frankensteins. Justine’s devotion to Caroline and Elizabeth knows no bounds … until a family tragedy changes her irrevocably. Her fate sets her against Victor’s monster, who is desperate for a mate—and desperate to wreak revenge against the Frankensteins.

“Lushly atmospheric and rich with historical authenticity, Unnatural Creatures is a riveting Gothic tale that I devoured in one sitting . . . An inspired reimagining that was impossible to put down.”

“Eerie, romantic, and exquisitely written, Unnatural Creatures is a brilliant and feminist companion to a classic. Kris Waldherr’s electrifying novel brings the women in Victor Frankenstein’s life to the foreground, reminding us that the most interesting stories are often the ones that go untold.”
—MEGAN COLLINS, author of The Family Plot

“In a masterful Gothic rendering, Unnatural Creatures reimagines the classic tale of Frankenstein through the eyes of the story’s hitherto silent women . . . Mary Shelley herself would be deeply moved by this dark tale of revenge and redemption.”
—STEPHANIE MARIE THORNTON, USA Today bestselling author of And They Called It Camelot

“In Unnatural Creatures, Kris Waldherr deftly uses the political climate of late 18th-century Geneva to add depth and nuance to one of literature’s best-known stories of one man’s folly, but it is her choice of protagonists—the three women closest to Victor Frankenstein—that truly elevates her work. Waldherr takes her main characters out of the mire of victimhood and gives them voices of their own. Idealized by Mary Shelley’s eponymous protagonist, in Waldherr’s telling each woman becomes a complicated human being, each strong in her own way, each full of passions and neuroses, morbid fascinations and love in all its forms . . . With settings so lush you can practically see, smell, and touch them, Unnatural Creatures, like the novel that inspired it, is a richly atmospheric work of Gothic wonder.”
—MOLLY GREELEY, author of The Heiress: The Revelations of Anne de Bourgh and The Clergyman’s Wife

“This is the feminist reimagining of Frankenstein you didn’t know you needed. Waldherr reanimates the story from the perspective of its three central female characters—Caroline Frankenstein, Elizabeth Lavenza, and Justine Moritz—creating a tribute to the strength and resilience of women that would make Mary Shelley proud.”
—CLARISSA HARWOOD, author of The Curse of Morton Abbey and Impossible Saints

“Luminous, strange, and haunting—Unnatural Creatures is a fitting tribute to Mary Shelley’s masterpiece, written by a true artist who understands that enlightenment can come from darkness. Waldherr’s latest is a rich feast for fans of the gothic novel and for those who like their literature a little eerie, a little unsettling.”
—LIBBIE GRANT, bestselling author of The Prophet’s Wife

“Elegantly written and inspired, Waldherr’s latest is a sensuous and empathetic look at the three women who knew Victor Frankenstein best. Fans of the original will find much to love in this fresh imagining of the classic tale. A veritable tour de force!”
—PAULETTE KENNEDY, author of Parting the Veil

“In Unnatural Creatures, Waldherr transforms the women of Mary Shelley’s Frankenstein from victims into protagonists. Passing the torch of her suitably dark Gothic tale between the mother, the betrothed, and the servant, she sheds new light on one of literature’s most famous stories in an atmospheric novel, which contrasts the unnatural act of Frankenstein’s monster’s animation with the maternal act of creation.”
—FINOLA AUSTIN, author of Bronte’s Mistress

“In Unnatural Creatures, Kris Waldherr gives sparkling voice to the women surrounding Victor Frankenstein and his monstrous creation, and in so doing deftly explores the roles of women as creators, caretakers, lovers, and survivors. Whether you’re a devoted Mary Shelley fan or have never read Frankenstein, don’t miss this masterful retelling. It’s the kind of book that traps you within its pages and won’t let go—as a good gothic novel should!”
—ALYSSA PALOMBO, author of The Spellbook of Katrina Van Tassel